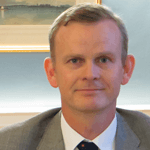 Professor Mark O’Neill graduated from University College Dublin Medical School in 1998 with 1st class honours and a physiology doctorate (DPhil), which he completed at Oxford University as a Rhodes Scholar (1992-1995).

Postgraduate training in general medicine and cardiology was followed by subspecialty training in interventional cardiac electrophysiology (2003-7). He also trained in Bordeaux with Professors Michel Haïssaguerre and Pierre Jaïs in catheter ablation of atrial fibrillation (2004-5). Atrial arrhythmias have remained his main clinical and research interest. He was appointed senior lecturer at Imperial College in 2008.

In 2009, Mark joined St Thomas’ Hospital and King’s College London in the Department of Cardiology and Division of Imaging Sciences where he was promoted to Reader in 2011 and Professor in 2013. He currently supervises five PhD students and has published more than 250 peer-reviewed papers, books and proceedings in the field of arrhythmia medicine. He is an internationally recognised expert in catheter ablation of atrial fibrillation and tachycardia.

Mark served as a council member of the British Heart Rhythm Society from 2011-2014. He founded the London Deanery Subspecialty Electrophysiology Training Programme in 2008 and is the current president of the cardiology section of the Royal Society of Medicine. He holds a Bronze National Clinical Excellence Award (2015).

He has an interest in the history of extreme human endeavour and enjoys running, cycling and football.