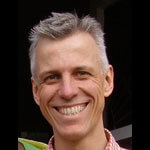 Tim Watts has been consultant neonatologist at Evelina London since 2001. He also provides clinical leadership in the London neonatal maternity networks, aiming to improve neonatal care across London. He is co-author of the Oxford Handbook of Neonatology.